Join Blais and Onapsis for a live, invitation-only cooking experience. All attendees will receive a full meal kit, enough to feed four friends, family members or colleagues to join in on the fun!

Onapsis has partnered with Celebrity Chef, Richard Blais to bring the art of fine dining and cooking straight to your home! Security, compliance and resiliency have never tasted better. 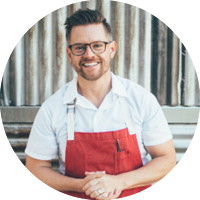 Richard Blais is a successful chef, restaurateur, author and television personality. Perhaps most recognizable as the winner of Bravo’s Top Chef All-Stars, Blais is a James Beard Award-nominated author of Try This at Home: Recipes from My Head to Your Plate, as well as his second cookbook, So Good. He frequently makes appearances on such hit Food Network shows as Guy’s Grocery Games, Next Food Network Star and Cooks vs. Cons, to name just a few. When not on set, in the kitchen or at home with his family, Blais may be found traveling cross country performing his live “stand up cooking” show to enthusiastic audiences nationwide.

Invite your closest friends and favorite family members over for dinner because you will be cooking up a Seared Ribeye Steak for four!

Please register to receive your meal if you are interested as this will be available on demand for you to make dinner another evening.