In today's SAP Patch Day, two SAP Security Notes are marked as a top priority and both have been previously released. SAP Security Note #2748699 affecting SAP Solution Manager, changed priority, from Medium to High (the only one in this category this month). This note was originally released in May, having been reported by Onapsis Research Labs. Due to continuous communication between our research team and SAP’s Security Response Team, SAP has increased its CVSS score from 4.3 to 7.1, making it now a High Priority note. If successfully exploited, this vulnerability (CVE-2019-0291) may lead to an attacker getting valid user credentials and the ability to create privileged users accounts. The CVSS score was increased due to new high impact to confidentiality. This is not an easy patch to apply. Several manual steps are detailed in the note that include not only how to install the fixed software component, but also the dependencies on other SAP Security Notes that should be applied first, and finally how to perform manual steps to secure and properly encrypt credentials.

SAP Security Note #2622660 appears again as the only HotNews of the month, being the fourth time this year to be released. Titled Security Updates for the Browser Control Google Chromium Delivered with SAP Business Client, we have talked about this note for several months since its original publication in 2018. This fix is not an SAP vulnerability by itself, but the problem occurs when an SAP Business Client is running on an outdated Chromium and a possible attacker could achieve SAP Business Client user access to execute malicious code. Even though it is published as HotNews, the real impact depends on which Chromium vulnerability is being exploited, since the note updates the whole component that has patches for different bugs such as remote code execution, information disclosure, Denial of Service (DoS), or even session hijacking. To avoid unnecessary risks, we recommend users not use SAP Business Client browser for activities other than SAP related.

This month SAP fixed four new vulnerabilities reported by the Onapsis Research Labs, three of them reported as Medium Priority and the fourth one as Low Priority.

SAP Security Note related to SMP Mobile Platform. A set of vulnerabilities recently reported by our Research Labs focused in SAP mobile products, SAP Security Note #2793805 is a fix for a previously released security note (#2725538). Both notes affect the SMP Mobile Platform. The first one fixes the SDK used to develop mobile applications, but the note released this month (CVSS score of 5.5) fixes the potential DoS in the mobile applications: SAP Inventory Manager and SAP Work Manager. Onapsis has helped fix 70% of mobile-related notes in the last year, with seven out of the ten SAP Notes having been reported by our research team.

SAP Note related to Diagnostic Agent. This fourth note released based on formerly reported vulnerabilities by our researchers is the only one in this section tagged as Low Priority. SAP Note #2772266 fixes a vulnerability allowing an attacker with local and low privileges to read sensitive information. SAP Diagnostic Agent usernames and passwords are not properly encrypted by default and a successful attacker may be able to gain access to it and reutilize them later to gain access to other systems using this high privileged user. Even though its CVSS score (3.4) is low, its exploitation combined with other bugs may be part of a critical attack.

Since last May's Patch Day, a total of 19 Security Notes were published. Below is a summary of the types of vulnerabilities that were fixed after that month's Security Notes Patch Day.  Represented are these types: Information Disclosure, Cross-Site Scripting (XSS) and Switchable Authorization Checks. 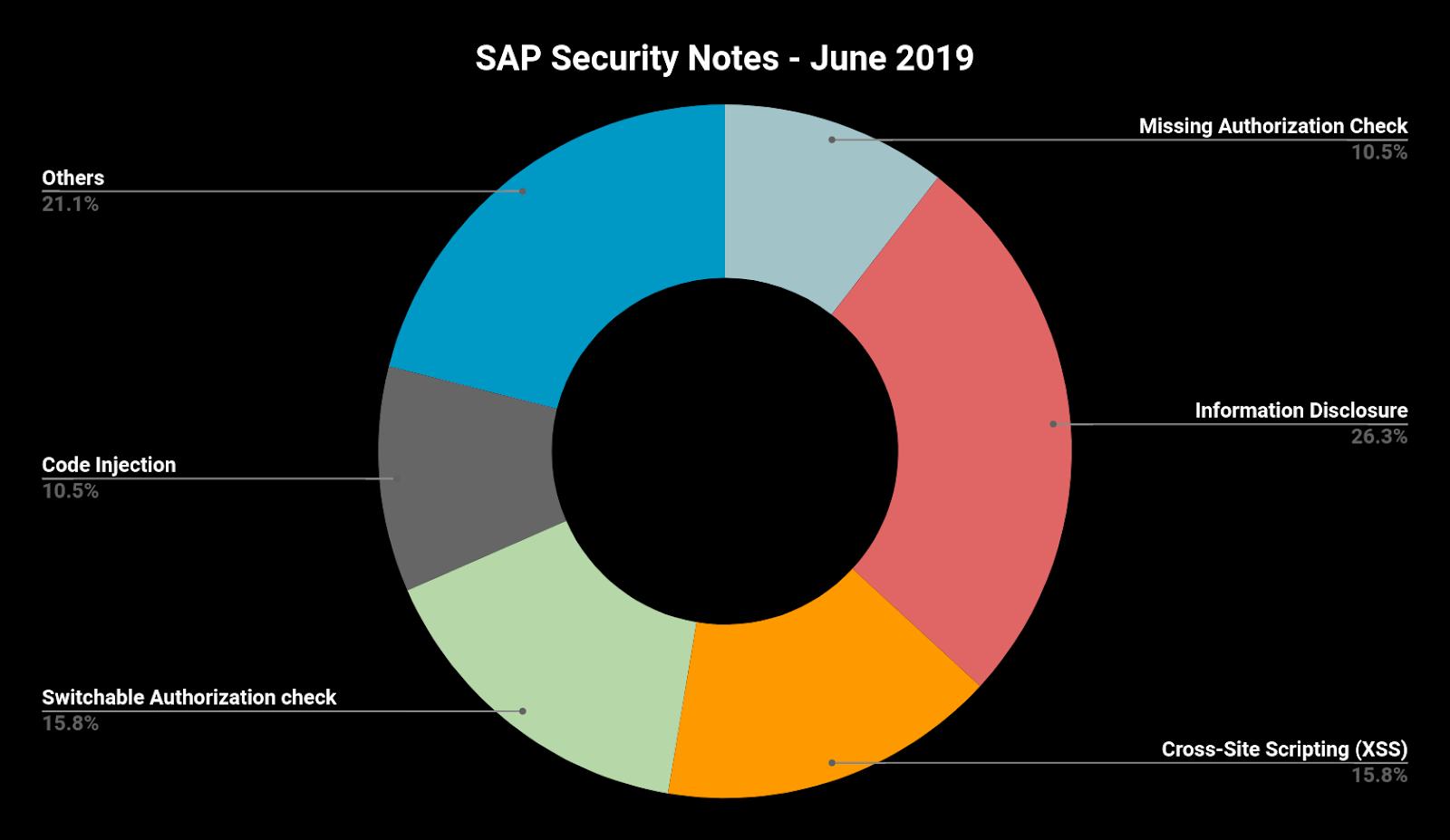 As we regularly do at Onapsis, we will continue to publish our SAP Security Notes Patch Day analysis blogs every Patch Tuesday and work to update the Onapsis Security Platform to incorporate these newly published vulnerabilities. This will allow our customers to check whether their systems are up to date with the latest SAP Security Notes and will ensure that those systems are configured with the appropriate level of security to meet their audit and compliance requirements.