Characterizing SAP’s December Patch Day as “calm” should not be misinterpreted. While the number of 12 Medium Priority Notes (plus one update on a HotNews Note) suggests that there is no urgent need to implement the corresponding patches, each SAP customer should reflect on the priorities and CVSS ratings applied by SAP in more detail. SAP Security Note #2741937, titled “SQL Injection Vulnerability in Central Finance CO” is a good example of this recommendation. The CVSS rating of 6.5 can be debated, given the fact that the vulnerability allows to “execute admin-level operations on database.” So, rating the possible impact on the system’s integrity and availability with “None” is at least a “courageous” decision.

SAP has released the expected update on the supported Google Chromium version for SAP Business Client. Less expected was the fact that the supported version still doesn’t cover the CVE-2019-13720 and CVE-2019-13721 vulnerabilities published by Google six weeks ago. While these vulnerabilities more represent a direct risk for the user’s client PC than for an SAP system, users are exposed to unnecessary risk here by forcing them to stay on an insecure Chromium version. In addition, given the fact that CVE-2019-13720 was already exploited and SAP systems might be impacted indirectly through infected client PCs connected to the same network, the next update on this note will be more than welcome.

MDM supports TLSv1.2 now with no option to fallback to SSL

At first glance, SAP Security Note #2504979, titled “Upgrade SSL Support to TLSv1.2” sounds like a simple notification for SAP MDM customers that communication security in this area was improved. But in fact, this is important news for everyone responsible for securing network communication.

If an SAP application does not restrict the SSL/TSL versions (and cipher suites) that it provides for the communication with a client, attackers can take advantage of a specific feature of modern clients. When initiating a handshake with the server, the clients will offer the "most secure" protocol that they support. If the connection fails, they will automatically retry again with a "more insecure" protocol until the handshake is successful with the server. Attackers can force these clients to automatically downgrade to an SSL/TLS version that supports cipher suites with algorithms that are known for weak security and vulnerabilities. This type of attack is known as a POODLE attack. More information about POODLE can be found here.

For more information about TLS, read this recent Onapsis blog: TLS: Much more than a Compliance Requirement.

“Missing Authorization Check” once again the number one vulnerability

This month includes four SAP Security Notes covering Missing Authorization Check vulnerabilities in ABAP components. The result of the SAP December Patch Day is also an important reference for customer development projects. Typical mistakes that can be found here are:

With only one updated HotNews Note and 12 Medium Priority Notes (eight new notes and four updated notes), SAP’s December Patch Day may be seen as less impactful. Nevertheless, when looking into details, the provided corrections solve security issues that might be more critical than their priority and CVSS rating might indicate at first glance. These “calm” Patch Days should also be used to cross-check own developments with regard to the described vulnerabilities. 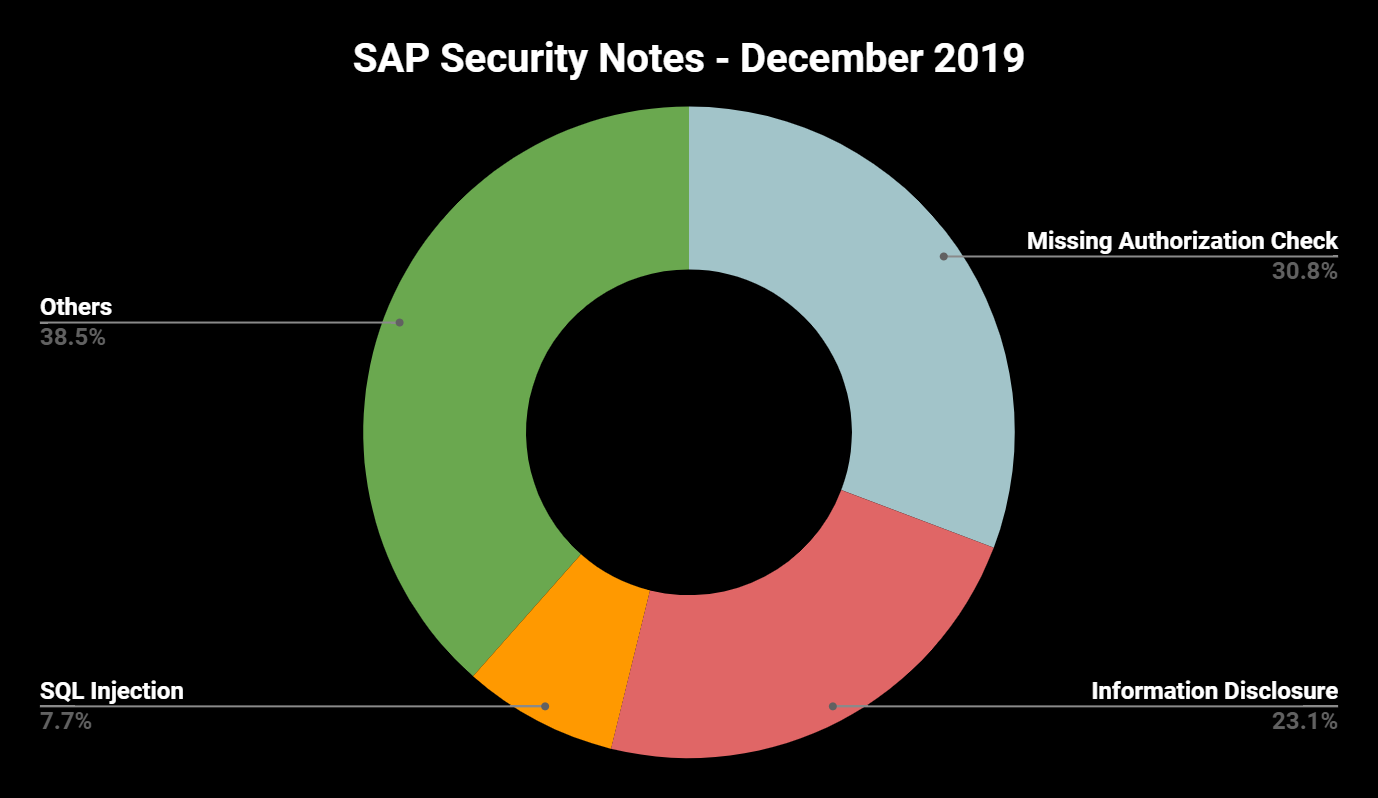 The Onapsis Research Labs is already working to update The Onapsis Platform to incorporate these newly published vulnerabilities into the product so that our customers can check missing notes during their security assessments.