Today, SAP released its monthly patch updates with several critical fixes, including three SAP Security Notes tagged as HotNews (the most critical one in terms of priority). Those notes affect several products, including SAP NetWeaver Application Server for Java, SAP NetWeaver UDDI Server (based on SAP AS JAVA too) and SAP Commerce Cloud (former SAP Hybris Commerce). The last time SAP published three HotNews on the same day was in 2014, so it’s important to pay attention to this month's release and begin applying the fixes as soon as possible.

These critical bugs include a vulnerability tagged with a CVSS Score of 9.9 and, for the second month in a row, a HotNews reported by the Onapsis Research Labs. There's also a fourth HotNews, a re-released note published late last month out of schedule. The two fixes affecting SAP Java platforms allow unauthenticated attackers to run remote command executions and potentially disrupt systems operations by shutting it down or collapsing its resources. SAP Java systems usually host web applications that are consumed by users, most probable for regular operations, so a continuity problem can present a severe economic impact in the organization.

Onapsis researches found and reported a critical vulnerability that was patched today as one of this month’s HotNews. SAP Security Note #2813811, titled "Server-Side Request Forgery (SSRF) in SAP NetWeaver Application Server for Java" has a CVSS of 9.0, since a potential attacker may access the Management Console for SAP Java systems (by stealing user credentials). Unauthenticated users gaining access as administrators of the Management Console could lead to total disruptions of the JAVA Web Portals as well as data access (espionage, leaks) or data modification.

The SAP Management Console provides a way for centralized system management. According to SAP documentation, an administrator (among others) using this tool can:

Onapsis researchers found this vulnerability in a component of SAP Java systems designed for administrator purposes that may allow an attacker to gain valid credentials for the Management Console (for a background user, not a nominal one). Once done, an attacker may directly connect to it and act as a manager of the system This means that an administrator would be able to execute any task allowed in the Management Console. The worst-case scenarios include remote OS execution on the system and stopping SAP system generation, a denial of service (DoS) Attack.

Even though this vulnerability is critical if successfully exploited, there are a few things that may ensure protection. While installing the patch is always the best option, two other potential protection scenarios (even if the component is vulnerable) include:

For the first time this year, SAP has published a Security Note with a CVSS of 9.9. This top scorer, SAP Security Note #2800779, is titled “Remote Code Execution (RCE) in SAP Netweaver UDDI Server (Services Registry)” and warns that attackers can take advantage of a buffer overflow vulnerability to inject code into the working memory. Because of the low complexity of this attack scenario in conjunction with the wide range of possible damages (e.g. information disclosure, data manipulation and destruction) up to the complete control of the product, this Note is considered as the most critical one to be released by SAP in 2019. Fortunately, this vulnerability can easily be fixed by applying the corresponding support packages provided with the note (versions from Netweaver 7.10 to 7.50 are affected and have a patch available).

Code injection is also the subject of the CVSS of 9.0 rated SAP Security Note #2786035, titled “Code injection vulnerabilities in SAP Commerce Cloud”. The described vulnerabilities affect two extensions used with the SAP Commerce Cloud solution. Also, an attacker may be able to take complete control of the application. Please read the ‘Solution’ section of the note carefully as there might be some post-installation steps required after applying the provided patches.

Other High Priority Notes in SAP HANA and Kernel

SAP has also released two High Priority Security Notes today. This is the first time in 2019 that there are six critical fixes (summing up High Priority and HotNews notes).

SAP Security Note related to SAP HANA database: The first High Priority vulnerability, fixed in Note #2798243 rated with a CVSS of 7.5, allows an attacker to send malformed connection requests to the SAP HANA instance which crashes the related index server. This leads to the typical symptoms of a DoS attack: long response times, service interruptions and low availability of services, all leading to a poor user experience.

A total of 23 SAP Security Notes were released during August’s Patch Day. The chart below summarizes the types of vulnerabilities, which include: Remote Code Execution, Missing Authorization Check, Cross-Site Scripting and Clickjacking. 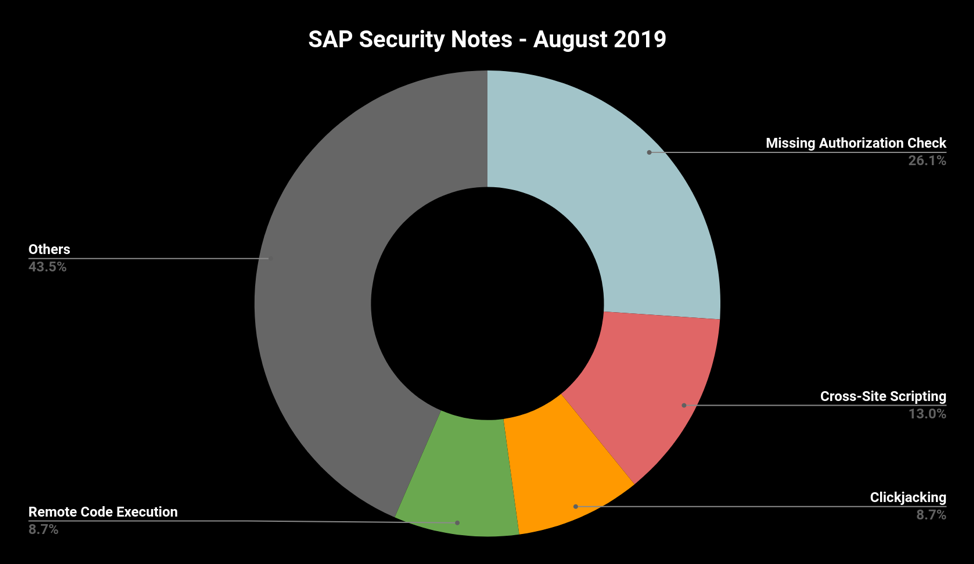 Considering the number of four HotNews and two High Priority Security Notes and taking into account the wide range of attack vectors exploitable in various SAP platforms, the August Patch Day demonstrates impressively the importance of keeping your systems up to date. Fortunately, running a vulnerability and compliance check with the Missing Notes Module in the Onapsis Platform will give you a clear picture of the relevant notes that are currently missing in your SAP landscape.

Our lead Security Researcher, Nahuel Sanchez, was credited by SAP in its acknowledgement webpage for our collaboration this month. The Research Labs is already working to update the Onapsis Platform to incorporate these newly published vulnerabilities into the product so that our customers can check missing notes during their security assessments.