This month, SAP released 29 new and updated SAP Security Notes, the highest amount this year, after releasing 12 new ones in January and February and 22 last March. One-third of the released notes have been tagged as important ones, including five High Priority and five HotNews (which represents the first time since December 2014 this amount of HotNews notes were released in the same month). Six of these 10 SAP Security Notes were patched due to Onapsis reporting and helping, including fixes in platforms such as SAP Portal, SAP Commerce, SolMan and SAP Host Agent, among others. The Onapsis Research Labs is sharing its analysis of this month’s SAP Security Notes to help SAP customers properly prioritize, patch and therefore keep their systems secure.

SAP Security Note #2904480 titled, "Missing XML Validation Vulnerability in SAP Commerce", has the highest CVSS of the ones released this month, 9.3 for CVE-2020-6238. SAP Hybris is an eCommerce Java-based platform that provides solutions for B2B and B2C commerce, among others. This vulnerability is present in SAP Hybris with a default configuration and exploitable by a remote unauthenticated attacker. It could potentially allow a malicious agent to read sensitive files and data from the system and even affect availability (in some limited scenarios). SAP has provided patches for both SAP Hybris on-prem implementations as well as SAP Commerce Cloud.

SAP Security Note #2896682 titled, "Directory Traversal Vulnerability in SAP NetWeaver (Knowledge Management)", is one of the four notes with a CVSS of 9.1 released this month and tagged as HotNews. It is also the second new patch developed by SAP with Onapsis reporting and helping. Identified as CVE-2020-6225, this vulnerability is a Path Traversal present in SAP NetWeaver Knowledge Management, which is a centralized access point for distributed repositories of files along the systems. It lets users navigate through folders, create, delete files, etc. In all these functionalities, a user can upload files. If unpatched, the system does not sufficiently validate input and therefore may allow a potential attacker to overwrite, delete or corrupt arbitrary files on the remote server. 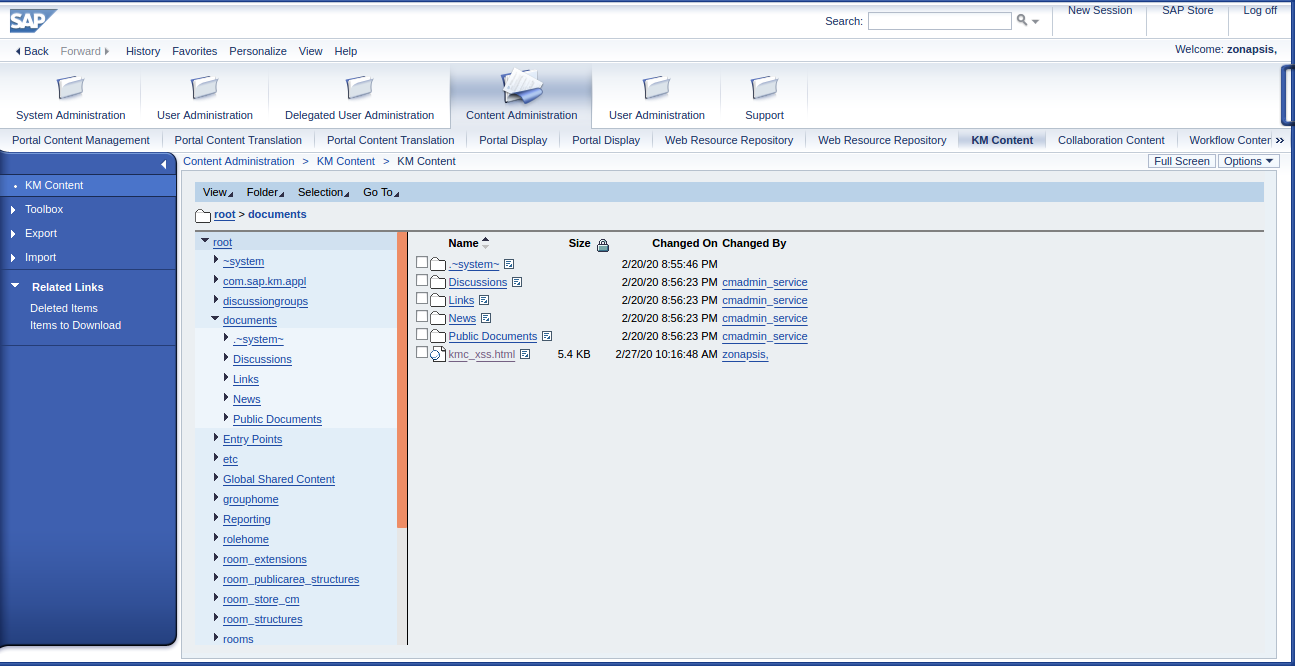 SAP also released Security Note #2839864, which replaces the corrections already published in Security Notes #2808158 and #2823733. All of these notes provide improved fixes to vulnerabilities reported by Onapsis for Operating System (OS) Command Injection in SAP Diagnostics Agent. In this latest update, SAP updated the 'Attachments' section adding a correction in one of the files attached to the note. If you want to better understand the scope and severity of this vulnerability, you can read our July 2019 blog post where we first explained this vulnerability after it was patched, or our September 2019 blog post when SAP improved the fix to cover other scenarios. We can confirm that this latest update is a minor one, that improves attachments for customization of the protection after the patch. Customers who have applied the March fix are protected against critical exploitation of this vulnerability.

SAP Security Note #2906994 patches a vulnerability identified as CVE-2020-6235 with a CVSS of 8.6. It fixes a missing authentication check in SAP SolMan, which may allow an attacker to read sensitive information or even access administrative or other privileged functionalities abusing the lack of an authentication check-in a component. This vulnerability, despite being a little bit less critical (CVSS vector-only affects confidentiality), has some similarities with the one patched in SAP Security Note #2890213, HotNews that was previously explained in our March 2019 blog post. Both vulnerabilities allow an unauthenticated attacker to get privileged access to SolMan and, combined with other vulnerabilities, post-exploitation alternatives include critical scenarios for affected customers if attacked.

One SAP solution that is affected above average by April’s Patch Day is SAP BusinessObjects. There are eight SAP Security Notes for this solution, covering various types of vulnerabilities, and three of them are rated as critical:

HotNews Note #2863731 describes the possibility of a remote command execution caused by a deserialization attack in SAP BusinessObjects Business Intelligence Platform. Parameters of a specific component can be manipulated in order to inject deserialized content. The provided fix enables data encryption for the traffic between client and server so that it can no longer be read. SAP has rated this vulnerability with a CVSS of 9.1.

Another part of the above mentioned specific component is also involved in the vulnerability described and fixed with the updated High Priority Note #2861301. While this vulnerability also allows the remote execution of code with an even higher impact on the application’s confidentiality and integrity, unlike #2863731, this vulnerability requires user interaction. The latter fact leads to a CVSS of 8.1, and thus, to High Priority.

SAP Security Note #2898077 is the second High Priority Note for SAP BusinessObjects on today’s Patch Day and fixes an Information Disclosure vulnerability. A non-authenticated user could exploit this vulnerability with CVSS of 7.5 in a certain web application of SAP BusinessObjects in order to gain information that can be then used for further exploits and/or attacks.

HotNews Note #2900118 completes the set of critical notes that were released in April. It fixes a Code Injection vulnerability in SAP OrientDB 3.0. SAP OrientDB is a multi-model, graph-based, no-SQL database that SAP acquired from Callidus Software Inc. in 2018. Because an attacker requires authentication and script execution privileges, the vulnerability is rated with a CVSS of 9.1.

Given the impressive number of fixes (29) for multiple SAP products—including five HotNews and five High Priority Notes—this month’s notes should be carefully addressed and properly prioritized for the most critical ones. 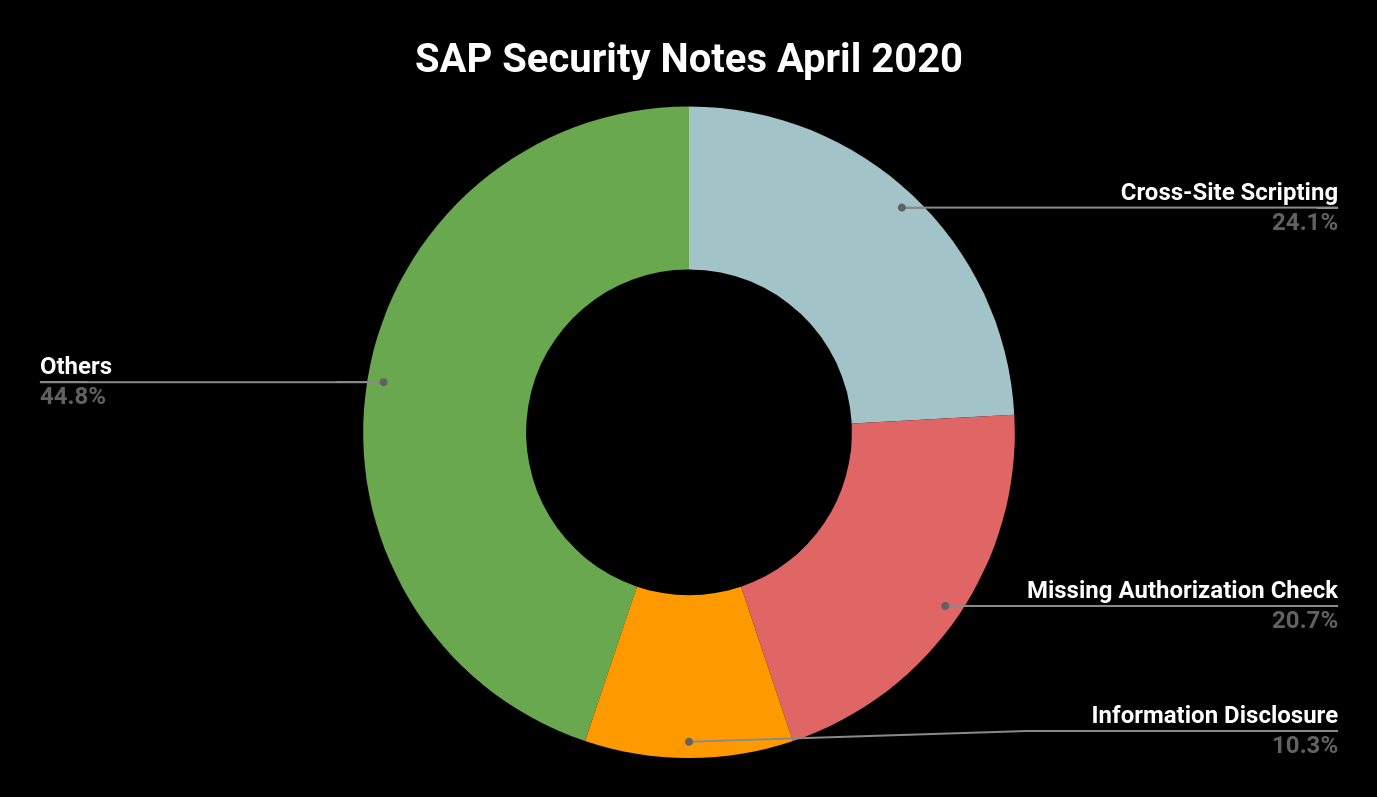